Are there chemicals in your mattress?

Co-Authored with Brad Luther, Ph.D.
At Savvy Rest we are often asked, “Are there chemicals in your mattress?” Usually we respond, “Our mattress contains only natural latex, we do not use synthetic latex blends,” because we think that’s what the questioner is trying to understand. But there is more to it than that.

The whole world is made of chemicals. The earth, our bodies, everything. Chemicals can be made by living organisms or synthetically in a laboratory. As consumers grow more educated about indoor air quality, more are becoming concerned about the buildup of toxic chemicals in their homes. Studies have proven that because of the “chemical soup” in common household products and poor air circulation, indoor air is usually much more polluted than outdoor air – whether you live in the country or city. Still, that doesn’t make all our buying decisions easy. “Natural” doesn’t always mean safe (consider snake venom), and “synthetic” doesn’t always mean unsafe (consider ascorbic acid—Vitamin C).

Is there long-term evidence that the materials in most mattresses can harm us? So far, not enough for regulatory action, but there is enough for us. Asbestos, for example, was approved for widespread use in construction for many years. Now, licensed people in hazardous-material suits must remove that same material. Or, consider how long it took before cigarettes were “officially” labeled hazardous to health. Lobbyists and profits had a lot to do with that. Yet long before tobacco executives were summoned before Congress, the combination of symptoms, smell, and common sense convinced most people that smoking is dangerous.

Just as nature creates good smells to attract us, there is a message for us in other smells, too. Memory foam mattresses have an acrid chemical odor that takes weeks to dissipate, and a significant volume of toxic chemicals is still present in these mattresses after the odor fades. The fabrics in most mattress casings are bleached, coated, treated and processed with a variety of chemicals to achieve a soft or elegant finish. And we are in intimate, full-body contact with mattress materials for literally years of our lives.

Some household toxins, such as strong cleaning products, release pollutants during their use that linger and eventually dissipate. But indoor air pollution from other sources, including furnishings, is released more or less continuously, according to the EPA.

Science is beginning to prove that our bodies’ tissues carry a cumulative load of chemicals that people weren’t exposed to in earlier years. Most industrial chemicals hadn’t been invented a generation ago. Some are already suspect, and some may eventually be proven to contribute to cancer. Yet if we wait for regulatory action, we might wait too long. Here’s why: “Of the nearly 80,000 chemicals regularly bought and sold today, according to the National Academy of Sciences, fewer than 10% have been tested for their capacity to cause cancer or do other damage." (Washington Post, November 4, 2007)

Although the mattress industry keeps foam formulas secret, one troublesome ingredient known to be present in most foam mattresses, particularly in memory foam, is formaldehyde. As described by the EPA:

Formaldehyde, a colorless, pungent-smelling gas, can cause watery eyes, burning sensations in the eyes and throat, nausea, and difficulty in breathing in some humans exposed at elevated levels (above 0.1 parts per million). High concentrations may trigger attacks in people with asthma. There is evidence that some people can develop a sensitivity to formaldehyde. It has also been shown to cause cancer in animals and may cause cancer in humans. Health effects include eye, nose, and throat irritation; wheezing and coughing; fatigue; skin rash; severe allergic reactions.

Another chemical used in the manufacture of memory foam and some synthetic latex blends is petroleum-based toluene diisocyanate, or TDI.

From Bayer Antwerp’s US patent 6391935:
“…when toluene diisocyanate (TDI) is used to make viscoelastic foams at low index, the foams can contain undesirably high levels of toluenediamines, particularly after the normal curing process. (Toluenediamines are now under severe public and regulatory scrutiny in Europe because they are highly toxic and possible carcinogens.)”

Anyone interested in a natural, organic or “green” mattress is usually looking for a product that is safe for human health and sustainable for the environment. Getting an unequivocal answer about what chemicals are safe, however, isn’t always easy. Because all matter is composed of chemicals, most chemists will say that synthetic chemicals can be created to be exactly the same as chemicals found in nature or in the human body. Let’s digress into chemical-speak for a moment.

Plants make glucose from carbon dioxide. Glucose, for example, is a short hydrocarbon called a chain.

Fibers, such as those in some fabrics used to cover or fill mattresses, are made of long hydrocarbon chains. These can occur in nature (such as in cotton, silk, or wool) or can be made synthetically. When synthetic fibers are made by joining small molecules, called monomers, together, the result is a polymer such as rayon or polyethylene. If the molecular chains grow in all directions instead of just one, they will form a solid, such as the plastic in a water bottle. But if a lot of bubbles are whipped into the solid as it’s produced, a type of solid called foam results.

Most foams used in beds and pillows, such as memory foam or synthetic blends (natural latex blended with a large percentage of synthetic chemicals) are a type of polyurethane. Manufacturers also add other chemicals to get the desired mattress “feel” and to control the creation of carbon dioxide—which in turn creates the bubbles that make foam.

Did we lose you? Back to plain English.

The rational concern about chemical ingredients in many mattresses is not that any exist at all. The concern is that when a foam is made with large amounts of chemicals, the bubbles in the foam contain some of the un-reacted chemicals as well as some reaction byproducts. As foam degrades, these chemicals slowly work their way from bubble to bubble until they escape out into the air. This is called off-gassing, or out-gassing. It can take a very long time for foam to out-gas completely, even after the odor is gone. The health consequences of breathing significant amounts of off-gassing chemicals for eight hours a night over a period of years are unknown.

Symptoms are known, however, and they are worrisome. Some people who sleep on memory foam or synthetic latex blends report headaches or breathing difficulties that resolve only when they switch to a nontoxic mattress. Others have developed chemical sensitivities that severely restrict their lives. All of the connections between mattress materials and health problems have not been scientifically proven with large (and expensive) case studies, but the anecdotal evidence is well known.

What about the natural latex rubber used in a Savvy Rest? It is made from the thick sap of the rubber tree. You may notice that in our web site and advertising materials, we never say “100% pure” natural latex. Other manufacturers do, but we will not, because that material does not exist. Very small amounts of additives are added to make even natural latex — otherwise the mixture cannot be prepared for pouring and baking. As independent testing shows, the necessary chemicals constitute less than five percent of the total content of Savvy Rest natural latex. Whatever offgassing may be possible from natural rubber foam is negligible, and there is no "more pure" natural latex available than what we use.

Latex serum (rubber tree sap) also contains isoprene, which forms naturally in animals and plants and is generally the most common hydrocarbon found in the human body. Isoprene is the monomer used to make the polymers in natural latex foam. Natural latex also contains a few percent of other materials, such as proteins, fatty acids, resins and inorganic materials.

What matters most to consumers is this: Is a Savvy Rest truly a natural product, and are the materials safe for me and my family? Yes. We’re proud of our product and grateful to our customers, who have done so much to spread the word about our integrity.

One issue is possible with natural latex. Some people have an allergy to the natural proteins in rubber. Up to 15% of health care workers who wear latex gloves eventually develop a reaction, for example. Still, if the allergic response is only dermatitis, most people with a mild skin response should still be fine on a Savvy Rest. You’ll have up to seven barriers between your skin and the latex itself: two layers of organic fabric and a layer organic wool fiber batting in the casing, more fabric in the mattress pad, then a sheet and even PJs. Our advice in that case is simply to have someone else assemble the mattress for you and do not use a latex pillow. One caveat: If you are in that rare group (less than one percent of the population) that has a severe allergic response to latex (as some people do to bee stings, for example), then you should avoid latex entirely. See our blog for an in-depth article on latex allergy.

We hope this look at the chemistry of natural latex is helpful. As latex comes from a tree, it is a renewable material. And because a Savvy Rest is so much more durable than most other mattresses, lasting 20 years or more, you won’t be buying a new mattress every few years. When your Savvy Rest finally wears out one day, it will simply biodegrade. 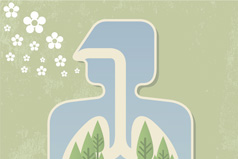 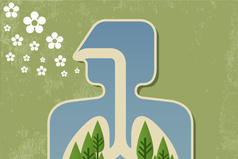 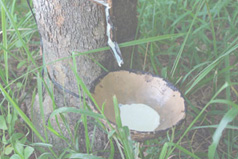 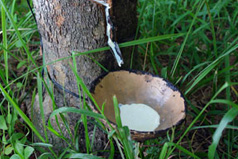 From rubber tree to latex layer: learn the process.